All Projects
Back to main
role

One of the current issues in South Korea is bad communication between employer and employee. Even though there is strict labor law, Since some of the employers do not follow the regulation, a lot of inconveniences has caused to the employee. But since it’s hard to take a measure to every case from the government, the employee needs a platform that can deliver their opinions.

“Alba recruiting”,  one of the biggest recruiting company in South Korea, planned services that can protect the employee. Therefore, by designing a user flow that uploads their opinions on media wall and promotes animation about services that offered by Alba, the agency that I was worked for created a solution that raise awareness about employment environment and meet the client’s objectives.

The use of kinetic motion capture technology allowed participants to actively engage in sharing their opinions.

While the display shows enormous amount of information related to stressful work environment, participants would wave their arms to try to erase all the stress inducing messages in a given time.

The participant smashes(kick or punch) the messages which are unpopular opinions of horrible bosses and turn them into positive messages.

We advertised client's mobile application by creating animations and displaying the policies about how they can protect their consumers.

The interactive contents related to the advertisement animation is appropriately placed in the media events flow, thereby inducing the participation of the user.

A media forum for conversation

We created this interactive design as a line of the communication channel between the laborers and the companies.

In order to gather participants opinions and put them on display, two methods were used. The participants first wrote down their thoughts, and we scanned their writings which were then displayed on the interactive media wall. 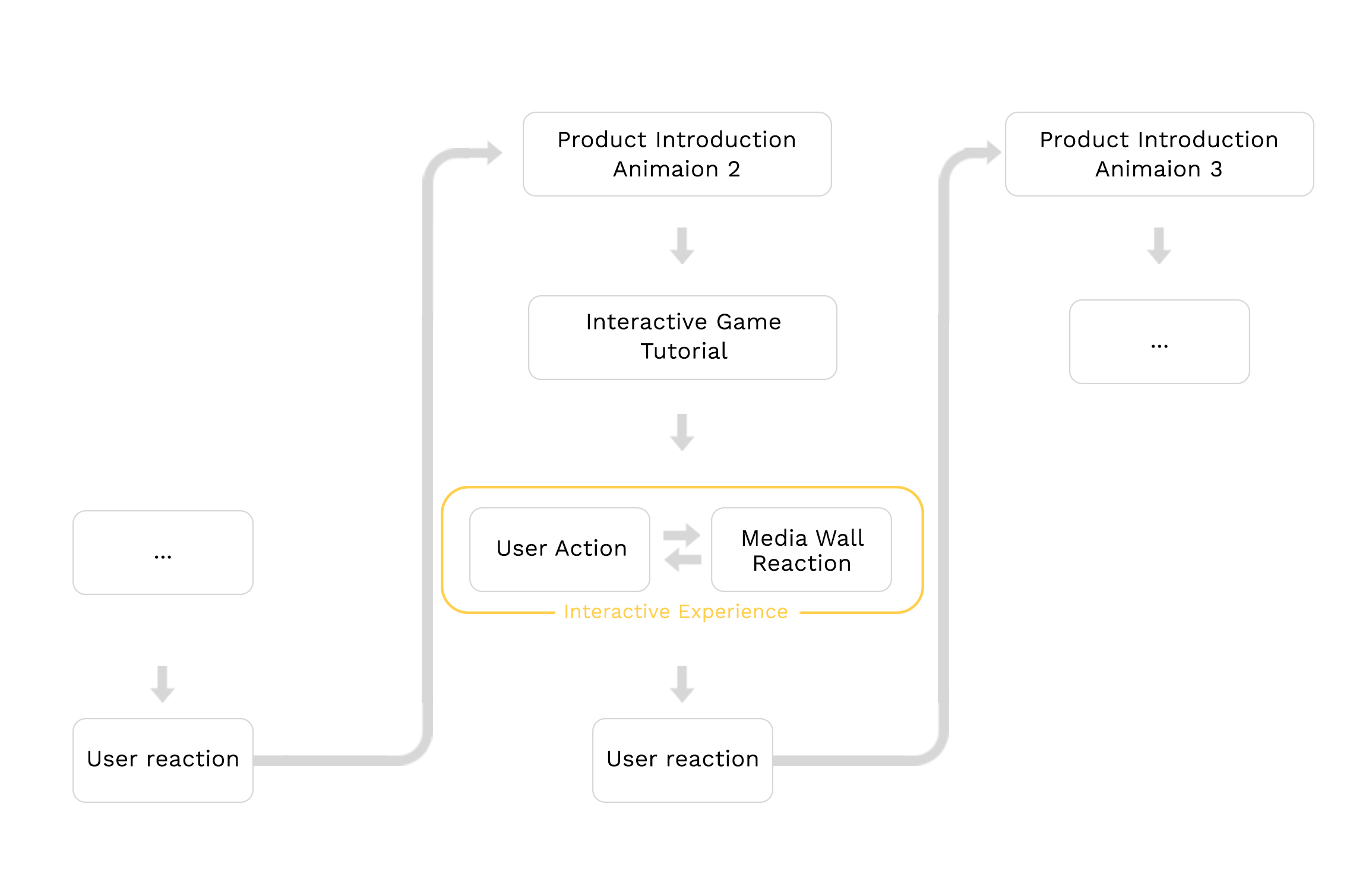 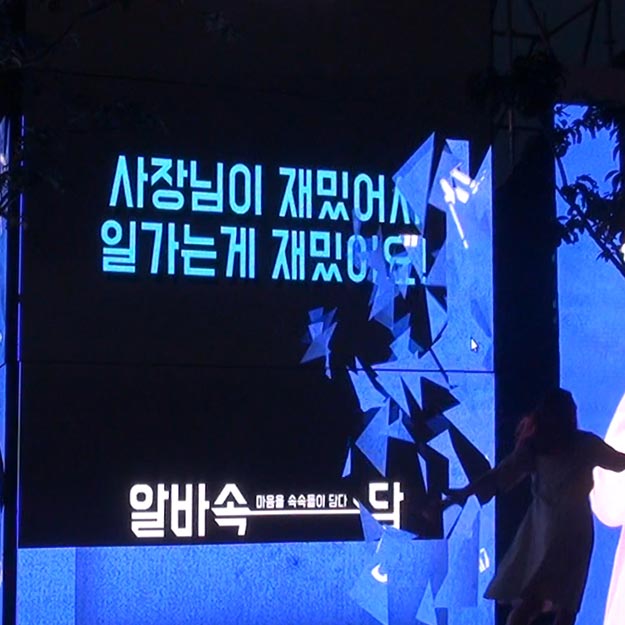 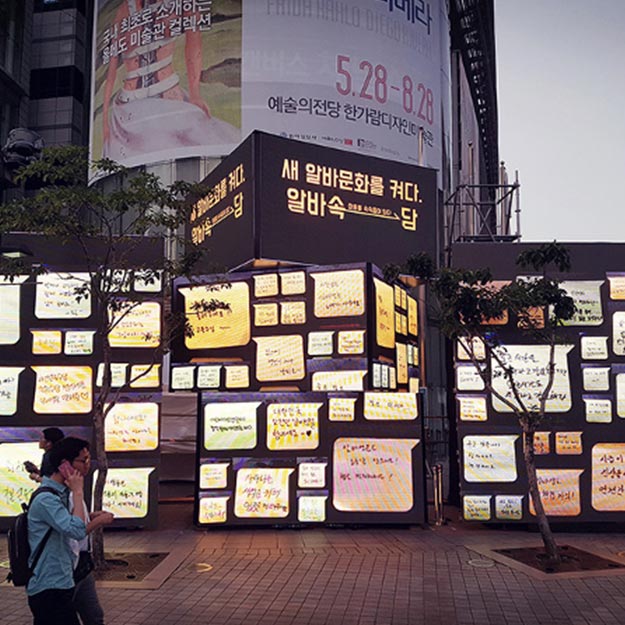 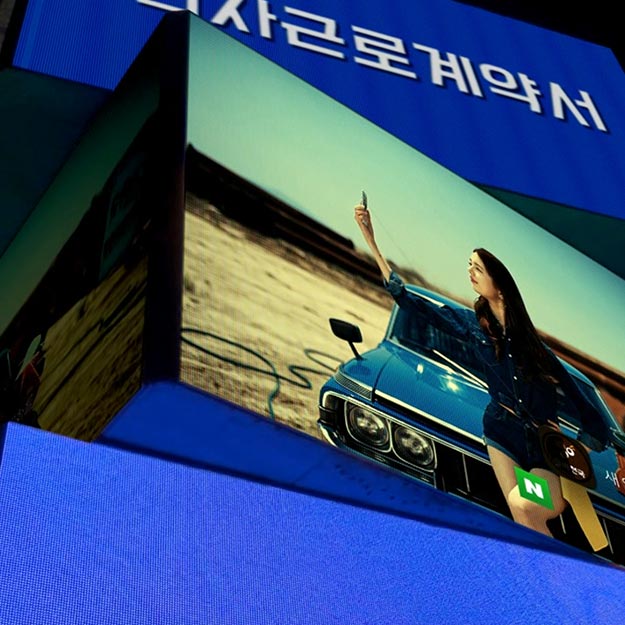 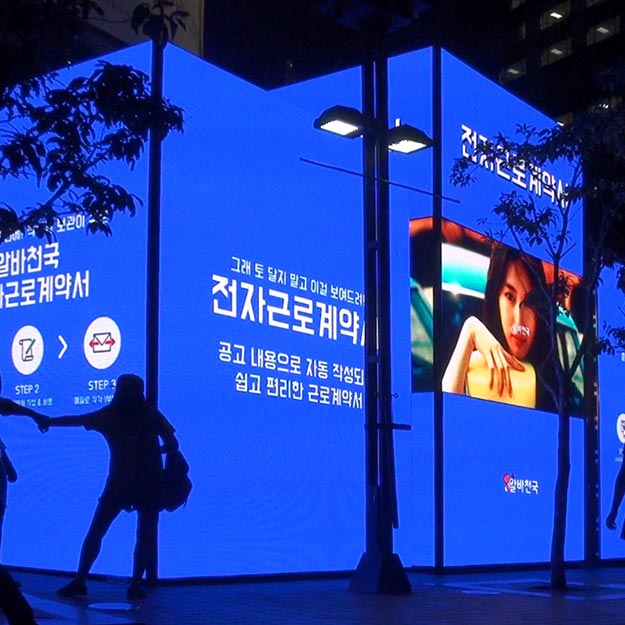 My specific role in this project

• By researching about Interactive media wall that developed by different country and company, I was involved in ideation sprint phase.

There are various methods to interact with users.

Before this project, I only studied the interaction between user and software which is processed mainly on website and application. But I realized that touching the button is only one of the way to communicate with the user.

Besides touching the button, the software can communicate with the user by motions, voice and more with current technology. And in the future, by utilizing many techniques of interacting, the user can experience the device with various and expanded way. Thus, this project opened my eyes to the enormous potential of UX/UI design.